A Unique Way that Your Pacsafe Bag Can Improve Your Photography

It was a sunny afternoon on Stockton Island in Wisconsin. The tent was all set up on the shores of Lake superior, it looked like a storm was coming, but I couldn’t be too sure. You never can be when on large bodies of water like that.

I was solo camping for the first time and after gathering some kindling, made a fire and stood back to admire my handiwork. I felt a bit like I understood, just an iota, how the first person to make fire felt, which was quite accomplished, indeed!

Stockton Island is full of trees, interesting rock formations, and that gorgeous fresh lake water. The thing about beautiful places is, there’s just this desire within us to photograph them and take a little piece of them home, right? Since I was there alone, I had to think of ways to get in my own photos without having a fellow photographer along.

The campsites were quite spread out, and a few hours had gone by without me seeing a soul. My plan of asking someone else to take my photo was probably not going to work out.

I hadn’t toted my heavy a tripod along either, so it was time to get creative. I lookedaround, what did I have with me? Apart from a water bottle and my Pacsafe camerabag, not much.

I slung the bag over my shoulder, filled up the water, and went on my way. I wasconfident that I would figure it out. 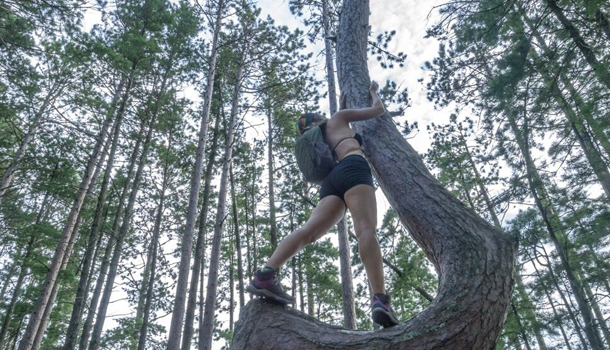 I saw my first photo opportunity pretty quickly when I happened upon a cave. How could I photograph that without a tripod in with no one around? I certainly didn’t want a dirty camera, and my Pacsafe CamsafeV9 anti-theft camera sling pack has always been great for protecting it, but today it would serve another purpose too.

I crouched down on the ground and balanced the camera on top of the Pacsafe backpack, and stuck the water bottle under the lens to prop it up. This looked like it might actually work.

I played around with the settings of it, turning on the timer, and jumps into position. It only took a couple tries and I came out with a pretty cool angle and a photo that I was proud of. Who knew that all you really need for an awesome photo isn’t another person, it’s not even a tripod, it’s just a little bit of ingenuity and experimentation with the things that you already have. 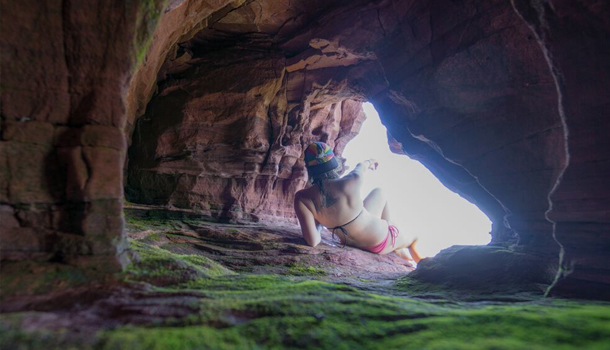 But what if you’re not in a quiet campsite? How can you take awesome photos in a place where you can’t exactly trust that walking away from the camera is a good idea?

Since it was an afternoon for experimentation, I thought about that too and wondered if I could somehow lock everything in place and still get an awesome photo.

Next I came to the shoreline and found a few rocks that looked perfect for my next photo shoot. I took out my Travelsafe 12L GII portable safe and looped around a tree, and then around my camera strap.

Even though in that particular setting I didn’t need to worry about thieves, it was good to know that this would totally work. It would be easy enough to even go farther away from it and use the remote to take the photo. As a solo traveler who doubles as a photographer, this is golden information. 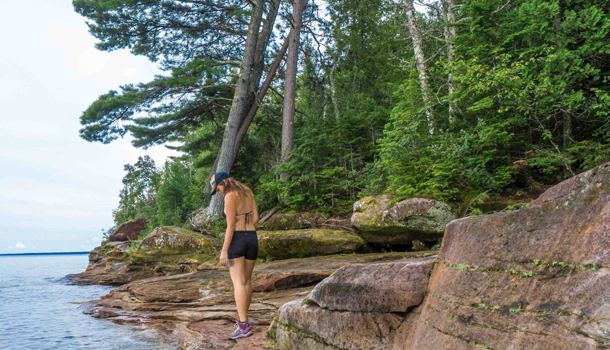 It’s not just about making it thief-proof either, what about in windy weather? By carefully strapping everything down, it’s a great way to keep the camera safe while you walk away for a short period of time.

It’s also a fun way to get new and interesting angles. I had never thought about putting my camera on the floor before, especially in the nature where I could get dirty and dusty. But by having a little something to prop it on, everything was fine. I could just slip the rain cover over my bag and then, voila, it had served an entirely new function!

So next time you’re traveling solo, and really want those awesome photos with you in them, get creative and think about how you can use what you already have with you.

Who knows? You just might ditch that tripod all together.