A Week in Greece During the Financial Crisis 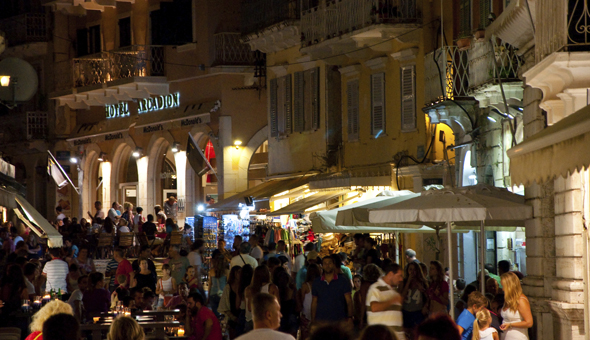 It’s mid-afternoon and I just woke up from a 90-minute nap underneath a cabana. I gazed at the ocean, contemplating the goodness of Grecian life. I opened my social media accounts from my phone and noticed comments on my pictures “to get out of Greece as soon as possible.” I thought, “But, why? This is one of the most amazing weeks of my life.” I realized the financial crisis has caused concerns for travelers. These tips and ideas will benefit travelers who are coming to Greece this summer during the financial crisis times.
City versus Island Life
Most television coverage shows the big city lifestyle. The fast-paced city life greatly differs than the slow-paced beach town. In the beach towns, locals continue to live life with a smile and hopes for a better future. If you are concerned about empty ATM’s, possible theft and crime, book your trip to the islands. Many Americans need to fly into Athens, but connecting flights and ferries travel to the islands daily. I visited six different island cities between Crete and Santorini and did not worry once about my safety. My advice, for those who fear the unexpected, is to escape the big cities and head toward the coast. Crime can happen anywhere in the world, but large international cities are more prone to thievery.
ATM Concerns
As of the week, June 29, 2015, the Greek banks have allotted Greek bankcards to withdraw up to 60 Euro per day. This allotment does not apply to EU, American, and other worldly bankcard holders. On June 30, 2015, I withdrew 300 euro in Crete and did not have to wait in line. In fact, I did not see one line in any beach town. No one seemed overly concerned. I did notice a short line of 10 people at one of the main ATM’s in Crete’s capital city, Heraklion.
Cash is King
The Greek economy thrives off tourism. Because of Greece’s situation, many tour companies and businesses are now only accepting cash. Why? First, tour offices need to pay their guides and operating companies. With only the ability to withdraw 60 Euro per day, the tour offices cannot pay the operators. Second, cash is money on hand and is not virtual money floating in the bank. Third, employees are guaranteed a weekly paycheck with available cash. Travelers can order Euros from the American banks prior to coming. Take the commission hit and exchange as much as possible at the airport. I used my credit card at several restaurants without a problem, but when booking day trips, cash was only accepted. If I booked the trip before the 60 Euro per day withdrawal, I would have been able to use a credit card. Be flexible and prepared to use cash at any establishment and ask if a credit card is accepted before ordering.

Safety Deposit Boxes
If you are concerned about traveling with lots of cash, book a hotel with a safety deposit box. This is especially important in party beach towns such that attract clubbers or heavy drinkers. I stayed at budget accommodation and did not have any problems with the locals or the guests. My hotel owner, Demetrius, greeted us everyday with a smile and high-five. He knew every detail of the financial crisis, but his sun-soaked brain kept a relaxed aura, which made his guests forget about the crisis. Those who are overly concerned can book a resort where employees work 24 hours per day.
Expect Free Stuff
Although there is a crisis, the beach restaurants and bars operate as normal. Free shots, free dessert, free fruit, visitors are treated with Greek favorites as a way to end a meal. Somehow this makes me question how the Greeks ever turn a profit, and makes me question if all this free stuff got them in this mess to begin with. Raki, the alcohol of choice, flows like water and once you make friends with the local—expect endless bouts of free raki served at all hours of the day. The laid back and generous Greek lifestyles makes you want to support their economy, especially while intoxicated with five shots of raki.
Overall Experience
July and August are the ultra-peak months for tourism. Being in Greece at the end of June I was surprised at how easy it was to get a table at a restaurant and a front row beach cabana. At dinner, a table of British people asked the waitress, “Where is everybody?” The waitress replied that because of the financial crisis many people cancelled their trip in fear of traveling to Greece. To some locals, this is upsetting not only because it hurts their economy, but there is a negative perception that the Greeks “will be out to get people.” If there’s one thing I know, Greece cannot “afford” a negative tourism culture. They wake up and ride the wave called life.
Traveling to Greece during this time is still safe, especially in smaller communities. If traveling by cruise ship, tourists will be okay since they’re exposed to each town during daytime hours. Be smart, use common sense, and let go of the fear to enjoy a traditional and authentic Grecian experience.