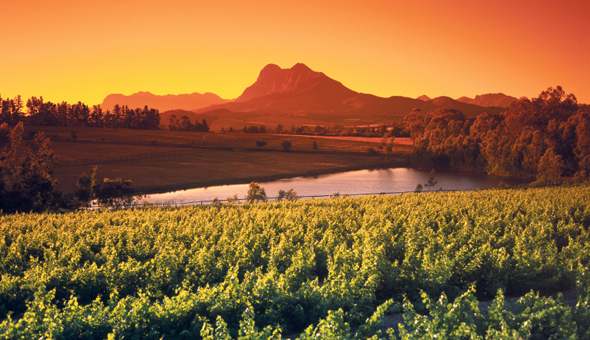 
Sprawled throughout South Africa’s Western and Northern Cape, you’ll find some of the world’s most fantastic wine growing regions in the world.
Incredible views, vineyards rich with history, lovely people, and above all, delicious wines entice wine-enthusiasts to make regular pilgrimages to the area. After learning more about the world of South African wines, we have a hunch that you’ll want to plan your own trip to check out the local wineries.
The World Stage
Though South Africa might not be the first country you think of when it comes to wine (that honor probably goes to France), it is a significant player in the world of wine. South Africa is ninth largest producer of wine in the world, with roughly 110,000 hectares of vineyards planted throughout the country.
Notably, wine production has increased significantly in recent years: just 20 years ago, 70% of South Africa’s harvested grapes were used to produce brandy, grape juice, or table grapes, with only 30% being made into wine. Today, these numbers have reversed.
The History
To appreciate the history of South Africa’s wines, you have to go way back to 1659. A Dutch surgeon named Jan van Riebeeck landed in Cape Town as part of the explorations of the Dutch East India Company. To help protect the crews from scurvy, van Riebeeck planted vineyards to produce wine and grapes.
The popularity of wine making has fallen and risen over the years (at one point, more than 80 million vines were planted in the area) and the Apartheid played into South Africa’s presence on the international wine scene. When the Apartheid ended and world exports opened up, South African wines were discovered—and deeply appreciated—on a global scale. The wine scene continues to grow: ten years ago, about 70,400,000 gallons of South Africa wine were exported, and that number nearly doubled by 2013.
The Vistas
It’s no secret that South Africa is a beautiful country. Vast vineyards are spread apart in the countryside, with gorgeous mountains framing the scene. The stunning scenery alone is enough to draw most people to visit the area. 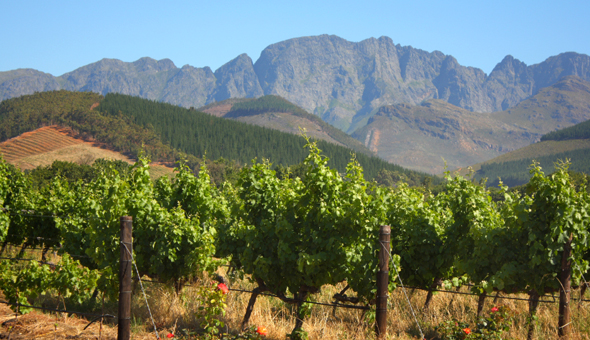 
The Weather
It just so happens that the climates that make South Africa’s wine regions so fabulous for growing grapes are also great for a lovely visit: think warm, dry heat during the growing season, which is from November to April. To give you a better sense of the weather, think of Napa Valley’s Oakville region.
The Community
South Africa’s wine making community is known for being exceptionally friendly. Unlike many other countries where winemakers consider themselves fiercely competitive, the relatively small community works in with a cooperative attitude. A visit to one winery will often yield recommendations to check out another nearby.
The Grapes
South African wines are typically produced with eight principal grape varieties. Chenin blanc represents 18% of planted grapes, with cabernet sauvignon representing 12%, and shiraz at 11%. Many people associate South African wines with white grapes—in the 1990, only 16% of South Africa’s grapes were red. Today, red grapes account for roughly 44% of grapes grown in South Africa.
The Wines
Last, but most certainly not least, are the wines themselves. Touring through South Africa’s wine region means that you’ll get to sample some of the best wines in the world—and that’s no exaggeration. South African wines also typically represent an incredible value, so pick up a bottle at your local shop and sip on a glass or two while you’re planning your trip to South Africa’s wine country.