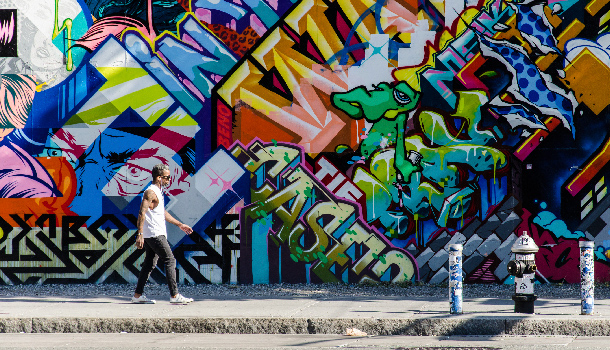 In the Instagram-obsessed traveller’s mind, there’s nothing better than a cool piece of street art to spice up their feed while they travel the world. Some destinations are particularly famous for their statement artwork: not just single pieces, but for entire networks of city streets covered with artistic statements. If you’ve got a hankering for street art, make sure you add these places to your list of world travel dreams!

Above the cobblestones of Hozier Lane, along Union Lane and all the way to the beach at St Kilda: the centre of Melbourne’s urban bohemia is to be found in the Laneways. Since the 1970s, these little narrow lanes have been filled with nooks and crannies covered with brightly coloured artwork in the form of murals, stencils, paste ups and sweeping paintings. It’s not just for the artists, either: the street art draws crowds of tourists throughout the year and has prompted festivals, guided tours, art communities, institutions and even a Graffiti Mentoring Project to pop up.

In the quirky neighbourhood of Vila Madalena, Sao Paulo, there’s a veritable feast of street art hiding at the meeting point of three different alleyways. ‘Beco do Batman’ is dense with overlapping pieces of street art which change all the time, thanks to huge interest from locals and international artists alike. Wandering these alleyways you’ll see illustrated versions of political opinions and homages to local Brazilian traditions and beliefs – but the art is always changing and redeveloping the alley way’s atmosphere. Try searching for the original Batman drawing that gave the place its name, or simply enjoy traveling the world’s graffiti in a single spot.

Banksy, arguably England’s most famous street artist, is who most tourists are on the lookout for when they explore London’s street art scene – but there’s so much more to see. Wandering through Shoreditch, Brick Lane, and around Spitalfields market – in fact, through most of London’s East End – there are huge colourful canvases on display from artists like Stinkfish, Pez and Stik. It’s also equally as fun to hunt out the tiniest street art examples, which hide behind lampposts, reinvent road signs and lie faded on the streets themselves. Thanks to the global attention, this area of London now has legal walls available for artists to use, so their work won’t be scrubbed out by the council as soon as it appears.

The street art scene throughout Colombia is well known, particularly in the capital of Bogota, but there’s also a fantastic amount in the old town of Cartagena on the Caribbean coast. Although there’s not much wall space, the neighbourhood of Getsemani (a predominantly working class area) is filled with street art. Much of it pays tribute to a Cuban artist named Pedro Romero – a man who was extremely vocal in Cartagena’s independence from Spain – as well as politicised cartoons which stretch all the way along Calle de la Sierpe (Snake Street). There’s also attention from Colombian and foreign artists alike: Irishman Fin Dac, who uses local models for all his work, travels throughout Colombia to brighten up the poorer parts of the country and took part in Cartagena’s Ciudad Mural festival in 2014.
By Flora Baker